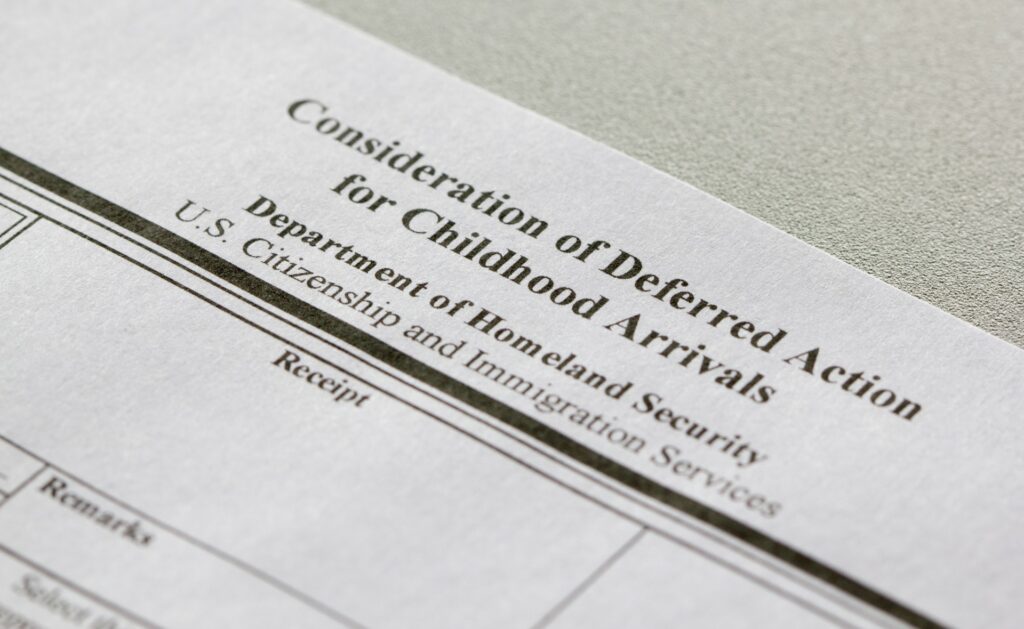 The future of the Deferred Action for Childhood Arrivals (DACA) program remains unresolved.

Meanwhile the Biden administration has implemented a final rule designed to “preserve and fortify” DACA, with results still undetermined.

Below are further details about the history of DACA, the effects of recent court rulings, the Biden administration’s attempt to protect recipients and more.

The Deferred Action for Childhood Arrivals (DACA) program was first implemented via executive action by President Barack Obama shortly after the 2010-11 version of the Development, Relief, and Education for Alien Minors (DREAM) Act failed to pass in the United States Senate.

The program has offered temporary protection to almost 800,000 young people since it took effect on June 15, 2012. DACA recipients can receive work authorization in the United States, enroll at colleges and universities, and obtain a driver’s license.

However, DACA does not provide recipients a legal pathway to citizenship.

Those who were eligible to apply for DACA status when the program was first implemented had to meet prescribed requirements.  Specifically, they must have:

President Donald Trump discussed his plan to terminate the DACA program multiple times during his campaign for the White House in 2016.

He followed through on that pledge shortly after he was inaugurated as president.

The Trump administration issued a memo in early September 2017 that completely rescinded the program, claiming that DACA was “effectuated by the previous administration through executive action, without proper statutory authority and with no established end-date. … Such an open-ended circumvention of immigration laws was an unconstitutional exercise of authority by the Executive Branch.”

DACA recipients continue to remain in legal limbo because of multiple court rulings within the last 36 months.

First, the Supreme Court, in a 5-4 decision in June 2020, blocked the Trump administration’s attempt to end DACA, finding that the government did not provide sufficient justification for terminating the program.

The program was then restored to its original form after the Chad Wolf memo published by the Trump administration outlining new guidelines for DACA was blocked by a U.S. District Judge from the United States District Court for the Eastern District of New York.

During this time, those who were blocked from applying to DACA during the Trump administration should have been able to do so. DACA recipients had the ability to receive full, two-year status renewals and travel outside of the United States by requesting advanced parole via the Form I-131, Application for Travel Document. It also allowed for initial DACA applications to be submitted again.

But the Supreme Court’s finding was that the specific government action by the Trump administration in terminating DACA was impermissible, without directly ruling on the overarching constitutionality of the program or the scope of executive authority. This left DACA exposed to other legal challenges, which quickly followed.

In mid-July 2021, a district judge from the United States District Court for the Southern District of Texas, ruled in the case State of Texas, et al., v. United States of America, et al., that the executive branch did not have “free rein to grant lawful presence outside the ambit of the statutory scheme” when the program was originally created.

That ruling enjoined USCIS from approving new applications for DACA but did not revoke employment authorization and deportation relief for current recipients.

The Biden administration appealed the ruling in State of Texas, et al., v. United States of America, et al. and both sides presented arguments to the U.S. Court of Appeals for the Fifth Circuit in early July 2022. Further details about the findings from Fifth Circuit follow below.

Simultaneously, the Biden administration attempted to strengthen the DACA program by codifying the program via a final rule published in the Federal Register.

The final rule, which was released in late August and will take effect Oct. 31, 2022, maintains all of the original regulations and requirements for the DACA program.  This final rule will replace the initial executive memo issued by the Obama administration in 2012.

“(DACA) has transformed the lives of hundreds of thousands of young Dreamers by allowing them to live here and contribute their talents to this great country without fear of removal,” Biden said in a statement released alongside the final rule. “We are fulfilling our commitment to preserve and strengthen DACA by finalizing a rule that will reinforce protections, like work authorization, that allow Dreamers to live more freely and to invest in their communities more fully.”

The rule’s main purpose is to respond to the ruling in State of Texas, et al., v. United States of America, et al., which found that DACA was implemented “outside the ambit of the statutory scheme,” and to protect the program from further legal challenges using that rationality. It will also make it slightly more difficult for further administrations to potentially repeal DACA.

“DACA has transformed the lives of its recipients and has made us better and stronger as a nation,” USCIS Director Ur M. Jaddou said in a separate statement. “USCIS is proud to play an important role in implementing the DACA final rule and is committed to ensuring DACA recipients can continue to remain a vital part of their communities and contribute to this country that is their home.”

Ruling from the U.S. Court of Appeals for the Fifth Circuit

In addition to the oral arguments presented in July 2022, the Biden administration also filed a brief early last month to the U.S. Court of Appeals for the Fifth Circuit asserting the new DACA final rule nullifies the arguments made against the program in State of Texas, et al., v. United States of America.

About a month later, the Fifth Circuit released its ruling, upholding the district judge’s finding that the executive branch did not have “free rein to grant lawful presence outside the ambit of the statutory scheme” when the program was originally created.

Yet, the U.S. Court of Appeals for the Fifth Circuit did not end DACA in its entirety, as some had feared. Instead, it sent the case back to the United States District Court for the Southern District of Texas to review the final rule from the Biden administration that will go into effect on Oct. 31.

That ruling from the court of appeals leaves in place the injunction blocking USCIS from approving new applications for DACA. Employment authorization and deportation relief for current recipients remains valid and current DACA recipients can renew.

Biden said in a statement he was “disappointed in … (the) Fifth Circuit decision holding that DACA is unlawful.”

The next ruling from the United States District Court for the Southern District of Texas is not expected for some time. The attorneys at Garfinkel Immigration Law Firm continue to monitor the situation closely and will alert clients as circumstances evolve.

Immigration advocates and some lawmakers have for years called for passage of a bill that would protect DACA recipients and provide a pathway for citizenship.

A law passed in both houses of Congress and then signed by the President would make it nearly impossible for legal challenges to be filed against DACA or for future administrations to revoke the program. Yet, nothing appears imminent in Congress.

“Thanks to DACA, we have been enriched by young people who contribute so much to our communities and our country,” DHS Secretary Alejandro Mayorkas said in a statement. “We need Congress to pass legislation that provides an enduring solution for the young Dreamers who have known no country other than the United States as their own.”

Congressional Democrats attempted to include immigration reform in a spending proposal released in September 2021. However, that portion was removed after the senate parliamentarian ruled the measure could not be included in a bill that required a simple majority, instead of the Senate’s typical 60-vote threshold.

The state of the DACA program, after the various court rulings and the issuance of the Biden administration’s final rule, as of October 14, is:

Garfinkel Immigration Law Firm recommends that current recipients should apply for DACA renewal as soon as they are eligible to do so, in order to safeguard against any future court rulings which could adversely impact the program.

Individuals who are considering applying for renewal of DACA, or are blocked from having their initial petition granted, should consider consulting with experienced immigration counsel to discuss their options.